I have been to countless regular season games and a bunch of post-season games, not just in Toronto or New York either. But I have NEVER ever seen a pre-season MLB baseball game … at a Spring Training facility. With Spring Training wrapping up, I figured now’s the last chance to post an article I’ve delayed doing for 5 years or so.

Yes, I have seen a few pre-season games, a couple at the SkyDome (Roger’s Centre now) and even one in Philadelphia, at Veteran’s Stadium in 1994 … vs my hometown Toronto Blue Jays. That is a story in itself culminating with me the lone Blue Jays fan in the front row, beside my Jersey-ite cousin Johnny (who doesn’t care any which way) doing the old we’re not worthy bow to Joe Carter as he does a warm up run beside me. The Philly Phans already irate at the Jays went mental on me and booed me and rained down popcorn at my direction like nobody’s business… I wonder why?
END_OF_DOCUMENT_TOKEN_TO_BE_REPLACED

Contrary to a ton of baseball people I know, I am immediately questionable to all Japanese PITCHERS when they jump from Japan to MLB. I capped pitchers because I had to be clear, most of the everyday guys are solid at what they do and are never really over hyped like all pitchers seem to be. Over-hyping pitchers seems to be natural occurrence these days, but the Japanese dudes gets some serious rock star treatment, and pretty much never live up to their expectations.
END_OF_DOCUMENT_TOKEN_TO_BE_REPLACED

Adapted from original article (circa 2005)

With only 2 weeks left until Opening Day and the last season looming for Mr. November the incomparable Derek Jeter, what better time to showcase one of DJ’s heroes and another one of the all-time greatest shortstop’s—Mr. Number 8, Mr. Oriole, the hall of famer Cal Ripken.

It doesn’t hurt that it’s the road to WrestleMania season, and that always means the Undertaker and his streak. Although the deadman’s streak is legendary, there is ONLY ONE streak that is truly truly iconic.
END_OF_DOCUMENT_TOKEN_TO_BE_REPLACED

Harry Caray, the famed long-time announcer for the hapless Chicago Cubs‘ 100th birthday was on Saturday. Harry passed in 98, but not before revolutionizing the 7th inning stretch into a marquee segment of every game, especially at Wrigley Field where it is now an honor to follow in Harry’s warbled mic-steps.

END_OF_DOCUMENT_TOKEN_TO_BE_REPLACED

Only ‘ESPN/Every other sports media with time to fill’ would come up with this ridiculous ‘debate’. The only reason I’m posting it is to laugh at Jay Crawford’s asinine arguments for Mo (well for closers in particular) vs Jeter (and everyday players, much less the toughest position on the field).

Despite his peers’ substantial reasoning why an everyday player’s consistent contribution is more valuable than a closer’s he still refutes over and over like he has his fingers stuck in his ears. “na na na boo boo” is what it seems he is lowering himself to.

What would be the point of a debate if everyone agreed on the same point? Which is why he is on the Mo-side, but damn come up with something actually relevant and refute with a point.

This vid also bothers me a little, because I end up siding with Skip Bayless, and I hate that.

PS ESPN, you royally suck for having the ability to “share” the video, yet not actually making the embed code work. 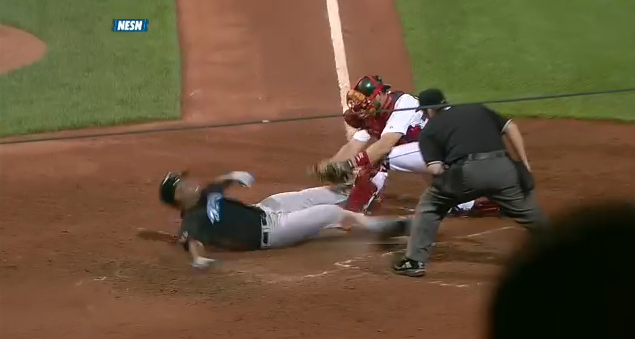 END_OF_DOCUMENT_TOKEN_TO_BE_REPLACED

Throw in a Jose Bautista Silver Slugger presentation and a bunch of opening day photos and you get a slideshow set to this years Jays theme (well the post-spring training theme).

Thanks in part to perennial Prime Minister write in nominee Joltin Joe, the much heralded 92/93 World Series Reunion is 2 days away. The city is gonna be buzzing in a few days… imagine if we actually played well all season? Oh man imagine if Doc was actually traded?

My lack of posting this year is so lacking. I better make up for it soon. Yes I am still a huge Yankees fan as well as a tremendous jays fan. Obviously. As great as I feel for the Yanks return to prominence, my heart goes out to the plucky Jays who remind me of The Dynamite Kid… for simply being harder workers who always have to look up to the bloated champions ahead of them and handicapped with the worst luck and injury prone. How’s that for a metaphor? I’m going to the Jays/Yanks game in a few hours .. for the first time in years I will be rooting the Jays over the pinstripes, as I did last night with Mariano (the undoubtedly best ever) Rivera vs Aaron Mr. MVP Hill. I always win in these situations .. and lose.

Enough about that, this is Jays fanaticism time! This week is gonna be crazy. Coming off of Caribana right into Blue Jays 90’s love week. This blog pretty much was berthed back in the late 80s early 90s because of this weekend. The agony of 85 (I went to the AL east clincher), 88 (damn Tigers!!!), 89 and 91 was worth it for those 2 glorious years in 92 and 93. Those were the years American baseball fans realized Toronto was somewhat relevant in their red white and blue lives.

I actually have that video in the SI WS VHS season recap. I have a bunch of other old stuff too. These pics I took years ago back at my folks place, my lil baseball basement haven. Note the Rickey Henderson love No band wagoner here! Yes, i have all those and still have those newspaper clippings … and way more.

Oh yeah a wall devoted to Yanks and Jays hats over the years … told ya.

To make up for my absence and now detoured Father’s Day post (TBA)….

** side note .. anyone have video of the close call double play break up where Dexter Fowler of the Rockies almost got beaned in the 3rd eye?